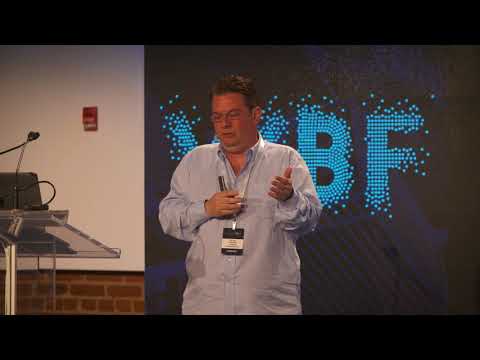 Speaking in the latest edition of EGR Technology FunFair founder and CEO Jez San shared his vision on how the Blockchain technology landscape could change over the course of 2018.
The headline prediction, and one Jez has touched on in the past, is the idea Ethereum will become the blockchain of choice. The idea Ethereum will prevail over bitcoin stems from Jez’s belief that it can continue to evolve and power the applications that will drive the next technology age: “The potential market of blockchains that use smart contacts, like Ethereum, dwarfs that of ‘store of value’ chains (i.e. bitcoin).”
He argues that if you think of bitcoin as DOS and Ethereum as Windows or Mac OS, it highlights the role Ethereum will play in bringing blockchain technology to the masses: “There is nothing wrong with DOS. It came first and was an essential part of the computer’s success, but computers only went mainstream when Windows and Mac OS appeared. DOS is difficult to learn, tricky to program and few applications ever ran on it. Windows and Mac OS support and encourage applications to be built and are ultimately easier for people to use.
Thanks to this adoption of the technology, Jez envisages more and more organisations will begin to explore how blockchain can impact their businesses; “Large global companies like Sony, MasterCard and Comcast are partnering up or building and patenting their own technology, while IBM has informed a major collaboration with food and CPG brands like Walmart and Unilever. As these brands continue to find ways to make blockchain work for them and improve their industries, it will increase consumer awareness and take us closer to mass adoption.”
In relation to how all the above effects the online gambling industry, Jez discussed the potential for ‘traditional online casinos’ to pilot blockchain technology, and not just the ‘smaller, more nimble operators’. In fact, he believes by the end of 2018, blockchain gaming technology will be trialled by mainstream online casinos, moving away from the existing centralised server model. This change to the entire casino will be executed on the blockchain, Jez argues, will transform the industry and will benefit players and the casinos with the players in particular finally guaranteed both a fair game and protection from the rogue casinos.
Thanks to the above, he believesÂ moreÂ blockchain casino games will be made and played. Arguing blockchains provide a more ‘fair, transparent, cost-effective, global and more secure platform than today’s centralised models’, he also focussed on the value of smart contracts and how they are the ‘perfect tool for gaming’. Those benefits would lead to more developers ‘exploring technology’ and helping more players to become familiar with the benefits.
With the increased use of the technology will come more regulation. “We anticipate increased regulatory scrutiny of the blockchain from financial, gambling, and data protection bodies and in many ways we welcome that trend. We’ll see regulations introduced in a number of countries this year, with Gibraltar leading the way in gaming – having commuted to produce legislation this month.”
“Though gaming regulators typically lag a little behind their financial counterparts, we expect interest from many regulated territories in how the blockchain could be beneficial in achieving their licensing objectives. For some of the more commercial jurisdictions this will mean concrete action such as the Malta Gambling Authority’s recent announcement of a ‘regulatory sandbox’ in which they’re inventing companies to play; while for others we suspect 2018 will be a “watching brief”.
https://funfair.io/blockchain-technology-2018-jez-gives-thoughts-expect-yea

BTC/EUR: Aktueller Bitcoin - Euro Kurs heute mit Chart, historischen Kursen und Nachrichten. Wechselkurs BTC in EUR. Author: Jez San Last Updated: 27 December 2017 A long-time bitcoin investor is now staking his claim to a new blockchain network, one he believes will enable more value creation in the long […] Jez San is a tech veteran. Founding Argonaut software as a teenager in the 1980s, he went on to pioneer 3D gaming on the SNES (Super Nintendo Entertainment System) and work on various classic nineties games, including Star Fox and Croc. Since moving on from Argonaut, he has turned his… Bitcoin and other cryptocurrency news. DM via Twitter @goldengatewayus for any old gateway support. Jez San 2017 Was Bitcoin’s Year. 2018 Will Be Ethereum’s A vocal supporter and critic of blockchain technologies, San was also a pioneer in real-time, 3D games .

CoinSummit London 2014 - The Ever Changing Landscape of Bitcoin Mining